A LIFETIME OF WHISKY LOYALTY REWARDED
Cyril Yates committed over 20 years of his life to distilling whisky in New Zealand. And although promised a trip to New York for his dedication by Seagrams, the corporate giant never delivered.
Now, 20 years later, CEO Greg Ramsay of the New Zealand Whisky Company is sending Cyril on his first ever overseas adventure as a thank you for the role he’s played in distilling whisky now earning accolades across the world. 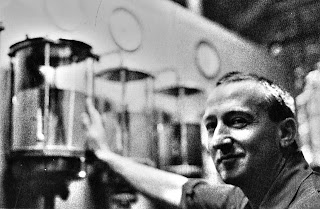 “I can’t believe I’m off overseas next month,” says Cyril, “I’m really so grateful and excited to Greg and the New Zealand Whisky Company. I’m heading to Paris for a whisky launch, to London for Whisky Live and to Scotland to visit some of the oldest distilleries; places I’ve only dreamt of going.”
Cyril began as a 16-year-old boy, painting whisky barrels out the back and ended up as distilling foreman, spending much of his formative years at the distillery. As such, he’s a fundamental part of the success of New Zealand whisky today.
Follow Cyril’s adventure (he departs this Thursday 26th Sep, 2013) but following his blog.